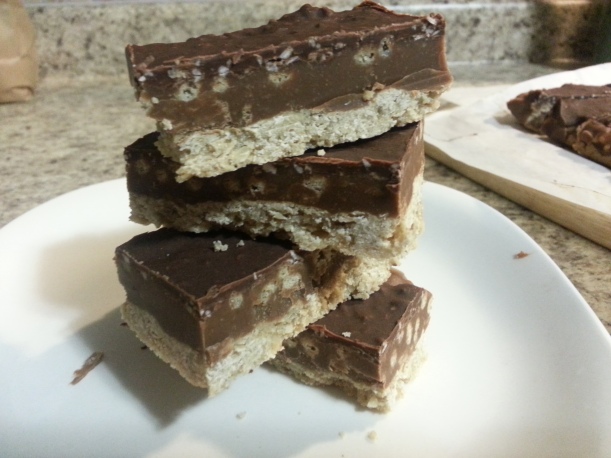 Chocolate has always been my vice. I was never much of a candy fan and still don’t seek out vegan gummies or candies in that sense. However, when I went vegan I thought I wouldn’t be able to enjoy chocolate in the same way again and was worried that would make it difficult for me to stick with it. I was wrong though! I discovered that dark chocolate has such a richer flavour and I have really come to enjoy the higher cocoa percentage that milk chocolate lacks. That and it helps knowing that the more cocoa bean present, the better the chocolate is for you as it is a greater source of flavonoids (a special class of antioxidants). The great thing is, you really only need a square or two to be satisfied too!

(There are still companies that add milk ingredients to their dark chocolate products, so please be sure to look at the label before consuming.)

I know this says chocolate bar in the title, but they are much healthier than purchasing the store bought sugar filled variety! By controlling the sweetener and choosing some healthier ingredients, you can feel much less guilty enjoying one of these. They are not completely enrobed in chocolate but they aren’t lacking chocolate flavour at all. I ate one of these and then immediately shared a second one and I am pretty sure I could eat the whole batch at once, so please be warned that these are super yummy! The crust adds almost like a cookie base, while the middle layer is fudgey and soft, with a perfect coconutty chocolate coating. And if you are concerned about gluten, these can easily be made gluten free (see notes). I just happened to have gluten free versions of ingredients so I went with it.

I adapted this recipe from Oh She Glows. Original recipe here.

1) Preheat oven to 350 F and line a 9 inch square pan with two pieces of parchment paper (going each way in the pan) for easy removal of your bars later.

2) If making oat flour, put 1/2 cup of rolled oats into your food processor and process until ground.

4) Add the rolled oats and process to form a dough – the oats should not be completely chopped up and it should stick together when you press between your fingers.

5) Press the dough evenly into the prepared pan using wet hands to prevent sticking. I just used my fingers to press it out but you can use a pastry roller if you have one.

6) Poke a few holes in the crust with a fork and pop in the oven for 11 minutes. Remove and place on a cooling rack for at least 10 minutes before adding the second layer.

7) In a medium saucepan, add peanut butter, coconut oil, liquid sweetener, vanilla and salt and heat over medium heat. Add cocoa powder here if also using. If you leave it out your middle layer will have a slightly different colour/taste. Stir until the coconut oil is melted and the mixture has a nice smooth texture. 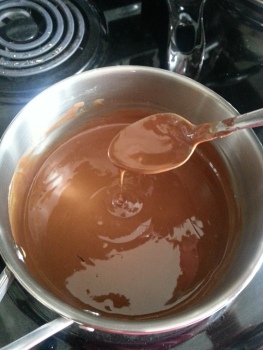 8) Remove from heat and when the crust has cooled pour the peanut butter mixture over top of your bottom layer.

9) Smooth with a rubber spatula and place in the freezer for at least 40-45 minutes to set completely.

10) In a small saucepan, melt the chocolate and coconut oil over medium heat.

11) Remove from heat and stir in shredded coconut.

12) Remove bars from the freezer and pour over melted chocolate, spreading evening with a rubber spatula.

13) Return to freezer to set the chocolate. When it is solid, cut into bars by slicing into 6 rows vertically and 3 rows horizontally.

14) Store in the fridge or freezer as they melt quickly. Serve before they have a chance to melt! 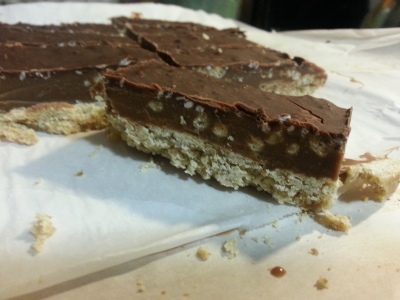 A Year of Going Vegan
Vegan on Two Wheels