I’m not sure how I’ve never been apple picking before this year (at least not that I can recall) but it’s definitely a fun activity! We went to Carluke Orchards and got a mixture of Northern Spy, Empire, Mutsu and Golden Delicious apples.

We used the Spy and Mutsu apples to make some rustic apple pies, based on a recipe I found over on the Minimalist Baker’s website. Both of these apple varieties make a great pie as they hold their form and don’t cook down as much as a lot of other apple varieties. They also have the perfect tartness.

We didn’t really change much, and we’ve now made four pies over the last few weeks. It’s a great recipe that is a huge crowd pleaser and will make your guest’s think you have incredibly impressive baking skills! 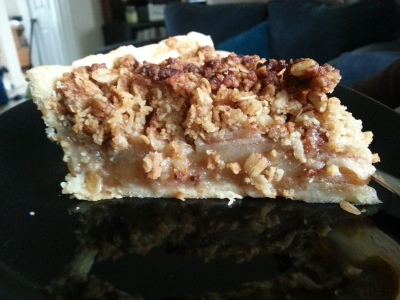 2. To make the crust: Add flour, salt, butter and shortening to a food processor and pulse a few times until combined. You should have pea sized crumbs at this point. Add 6 tbsp of the ice cold water and pulse a few more times. At this point you may need to add more water, 1 tbsp at a time, until you have a nice dough that scrapes away from the bowl. 9 tbsp of water total seemed to work best for us.

3. Remove dough from the food processor bowl onto a well floured surface. Divide dough into two equal pieces and mold together with hands. Form each half into a 1 inch thick disc and then roll out into an even circle, adding more flour if it gets sticky. Roll onto a floured rolling pin to gently roll into your pie dish or cast iron skillet. Gently form your pie dough to your skillet or pie pan, trim if necessary, and crimp the edges if you desire although leaving it rustic works nicely here. Repeat with your second pie dough. Refrigerate while you prep the apple filling.

4. Apple filling. You can work with half the apple filling mixture at a time if you don’t have a large enough bowl. Mix together 7-8 of the apples, 3/4 cup of sugar, 1 tsp of cinnamon and 1 tbsp of flour for each pie. Add some lemon zest for a nice bright flavour for your filling. It’s actually best to toss everything together as you’re cutting the apples to prevent browning. You can coat the apple slices in lemon juice as well while you continue slicing!

5. Fill your pie dough with the apples. It should be nice and full.

6. Pie Topping: Add the crumble topping ingredients together, minus the butter, and mix together. Cut in the butter with a pastry cutter or fork. I actually used my hands as it worked better. Just work somewhat quickly to keep the butter from getting too warm. Divide over your pies, spreading evenly to coat, and push down slightly to pack the topping. A Year of Going Vegan
Life by Six Mile Creek

Thoughts of a vegan librarian.